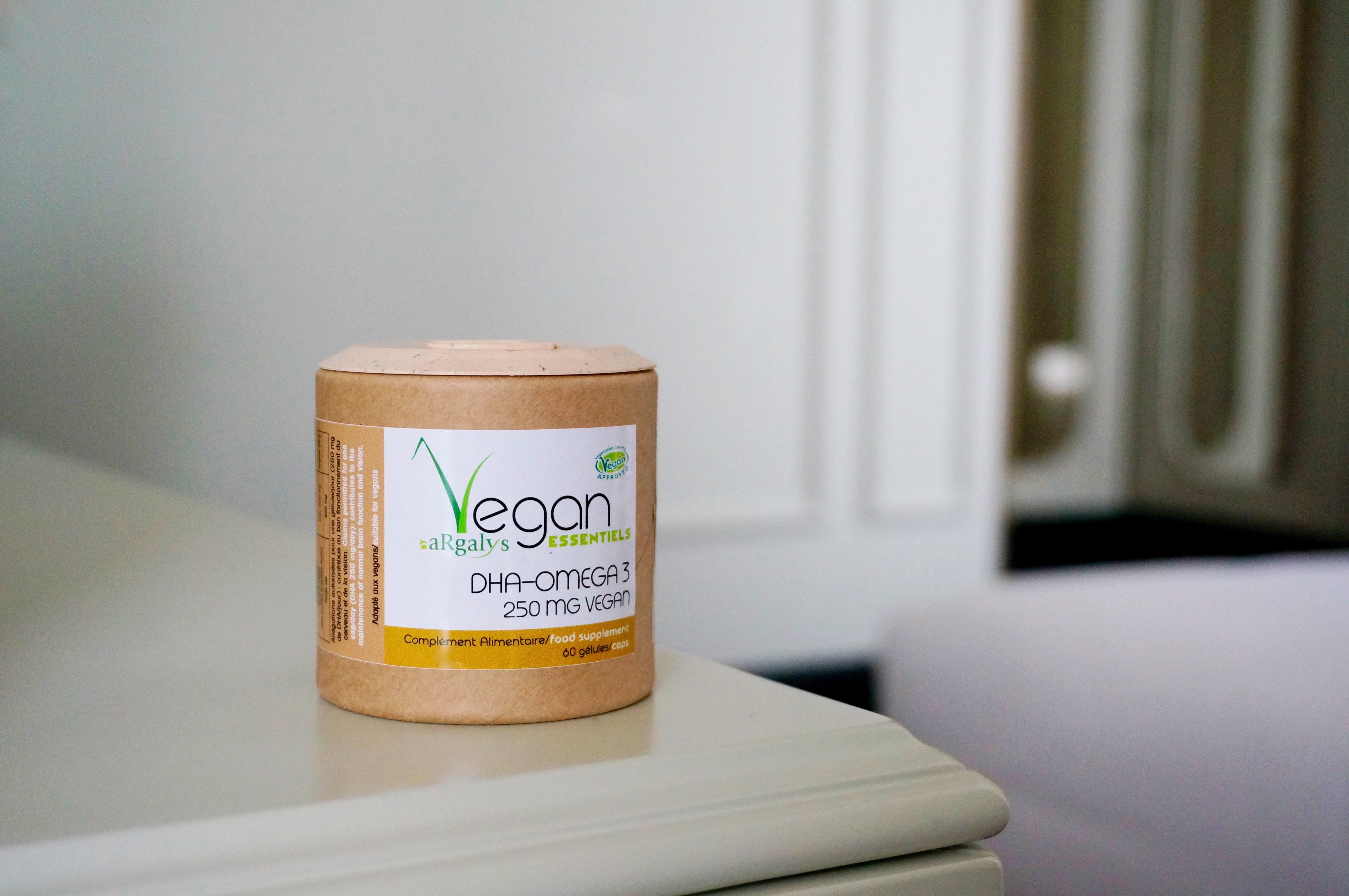 60 capsules of 250 mg of DHA extracted from the microalgae Schizochytrium sp with low carbon footprint.

Where to buy Argalys Essentiel products ?

One capsule corresponds to the daily intake recommended by ANSES: 250 mg of DHA.

From 8 years old and adult:
1 capsule a day:

One to two capsules a day

DHA is a particular fatty acid from the OMEGA 3 family: its recognized properties are:

A preventive role in the vision:

A role in brain function:

A role during pregnancy on the development of the fetus:

DHA is also involved in the good performance and functioning of all cell membranes and also in the transmission of nerve impulses.

Argalys DHA Omega 3 Vegan from Algae extract covers the needs of DHA with a single capsule / day. This is a major breakthrough for vegans that did not had a source of non-animal DHA until recently. For Omnivores, it is a source of DHA with no negative impact on marine eco-systems and therefore very recommendable for all those concerned by the environmental impact of their consumption.

Argalys DHA Vegan is obtained by the exclusive QualitySilver © process which protects it against oxidation. QualitySilver © oil is on average 5 times more stable than standard oils (result of the RANCIMAT test) which guarantees an optimal quality for a longer time.

Argalys DHA Vegan is 100% made in Europe with European ingredients (algae culture, oil extraction, conditioning packaging into our Eco friendly pillbox of vegetable plastic and carton), produced under GMP and registered by the sanitary authorities in France (DGCCRF). Our variety of algae is one of the very few officially authorized in Europe.

“In general, whatever their diet & lifestyle, the average population has an insufficient contribution in Omega 3”

The fatty acids called Omega 3 are necessary to the body.

Two are Essentials, which mean that they must be provided by the diet, because they can’t be synthesized in the body:

DHA is the most abundant fatty acid in the membranes of nerve cells (brain, neurons) and the retina. It is also found in high proportion in heart cells.

DHA and EPA are not present in vegetable oils (but in oily fish oils etc.). With a sufficient diet of vegetable oils, the body can synthesize enough EPA, but not enough DHA.  Consequently a DHA supplementation is always needed, while we recommend to balance well the vegetable oils to enable the body to produce his own EPA: they are many positive side effects (and first, ensuring a proper level of ALA).

about DHA (docosahexaenoic acid) and the Omega 3

It is a Fatty Acid found mainly in certain oils of animal origin rich in Omega 3 (and algaes).

The claims validated by the European health authorities for a dose of 250 mg of DHA per day concern the maintenance good functioning of the brain, vision and heart.

Vegetable oils, including those with high Omega 3 content, do not contain DHA

Alpha-Linolenic Acid (ALA) is an Omega 3 present in all vegetable oils and is the potential precursor of DHA.

This transformation in the body is nevertheless very weak (from 1 in average  to 5% in good conditions) and very dependent on other factors (enzyme content, amount of Omega 6 in the body…). Studies report extremely low conversion levels (less than 0.05%) when these factors were unfavorable.

Health institutes consider in practice that less than 1% of ALA is converted into DHA, whereas this transformation rate is on average 10% from ALA to EPA: which explains why EPA supplementation is not compulsory when the vegetable oil intake is reasonably correct (with approx. 3/5 gram of ALA omega 3 /day: equivalent to two spoonful of colza oil).

In strict vegan diet even with an optimistic transformation rate of 1% (from ALA to DHA), we should consume everyday 50 g (1.8 oz of linseed oil or 200 g (7 oz) of walnut or rapeseed oil to cover the need for DHA (250 mg/day): much over the usual oil daily intake, explaining why a supplementation is DHA is needed.

Furthermore, vegan diets are generally richer in Omega 6 (see last chapter) than omnivorous diets, which decrease the efficiency of ALA conversion to DHA. The risk of chronic sub-deficiency of DHA is real under these conditions, because the natural vegetarian diet cannot guarantee the coverage of these needs. For a long time, the vegans had to live with this weakness without solution to remedy it.

The end of the headache for vegans and vegetarians: DHA Algae extract

Some microalgae (Schizochytrium sp in our case, one of the few officially authorized in Europe) have the capacity to synthesize the DHA. The extraction of the oil of Argalys DHA Vegan is carried out with a precise and expensive technology, which delivers a DHA of high quality. This unique process (QualitySilver ©) greatly increases 5 times in average the stability of the oil (which is less sensitive to oxidation) which guarantees the longer stability of its nutritional properties: a quality really superior to standard oils.

For all Eco responsible people: switch also to DHA from Algae !

“Only 15% of western populations have sufficient intake of DHA”

According to several studies, only 15% of western populations have sufficient intake of DHA linked to their low consumption of oily fishes. Do not look further for the craze for dietary supplements of the Omega 3 family.

But the impact of this craze is not neutral for the marine environment in the medium term.

Initially, fish oils were obtained from the by-products of the processing of fish for human or animal consumption (‘fishmeal’): the demand for omega 3 did not generate any additional catch.

Increasing demand simultaneously for fishmeal and omega 3 led to fishing specifically for these two markets, mainly in the Pacific (anchovies & sardines). This fishery is nevertheless managed with annual quotas and quantification of the target populations so as not to deplete the resource, but it is difficult to know the exact impact of the harvest of these small fishes that are at the beginning of the food chain and serve as fodder to other bigger fishes: the less food there is and the more the downstream fauna is likely to decrease.

More worrying still is the Antarctic Krill fishery, which escapes any serious international framework. We know:

Be consistent with your values: algae are now the best sustainable source of supply of DHA

Where to buy Argalys Essentiel products ?